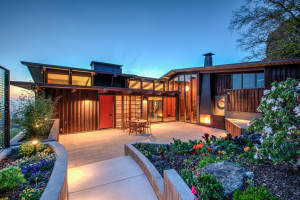 Two new homes will be featured on the tour, as well as 4 Mid-Century homes that have been renovated to varying degrees. One of the new homes, dubbed “Courtyard Retreat” because the house wraps around a central courtyard is set in the Berkeley Hills. The second newly constructed home on the tour is a boldly modern home in the Oakland Hills.

The most extensive remodels on the tour include a home that was built in 1937 and has been completely revamped into a home suitable for a 21st Century family; a Ratcliff-designed home in the Berkeley Hills that brings contemporary design into a Mid-Century home; and a home in Piedmont that has been transformed from a traditional 1948 home into a modern masterpiece.

Rounding out the half-dozen homes on the tour is an Oakland Hills home designed by Joseph Esherick featuring a newly remodeled kitchen that preserves the original’s minimalistic design while bringing it into the 21st Century.

This tour offers a great opportunity to take a peek into a few of the East Bay’s beautiful homes – and perhaps gain some inspiration for your own. Tickets for this exciting East Bay Home Tour are available through AIA East Bay.

To view details regarding the tour homes or for more information visit Home Tours 2015.