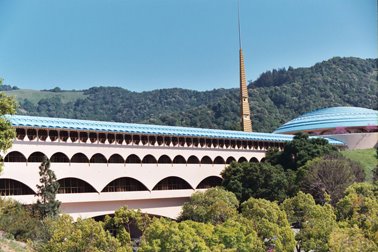 As an Eichler homeowner, I appreciate the challenges of bringing mid-century construction and sensibilities into the 21st century, while remaining true to the spirit and intent of the original structure.  As such, I’m especially interested in the changes that are in the works for the Frank Lloyd Wright designed Marin County Civic Center.  Meetings there are about to become a lot more interesting and user-friendly.  In a project beginning this month and planned to be completed by February, the Board of Supervisors’ chambers in the historic Civic Center are receiving their first major upgrade since the Center opened in 1962.

New speakers, microphones, lighting, flat-screen monitors, and high-definition cameras will be installed, along with an assistive listening system for the hearing impaired.  To ensure that the new features wouldn’t compromise the integrity and character of the original Frank Lloyd Wright design, the Frank Lloyd Wright Civic Center Conservancy reviewed the plans before work began.

It will be exciting to watch the progress at the Civic Center and interesting to see how modern technology integrates with the organic sensibilities of Frank Lloyd Wright’s work.

P.S.  If the efforts of the planners and designers at the Civic Center awaken the remodeling urge in your spirit, feel free to check out our Eichler remodeling photo gallery for some additional inspiration.