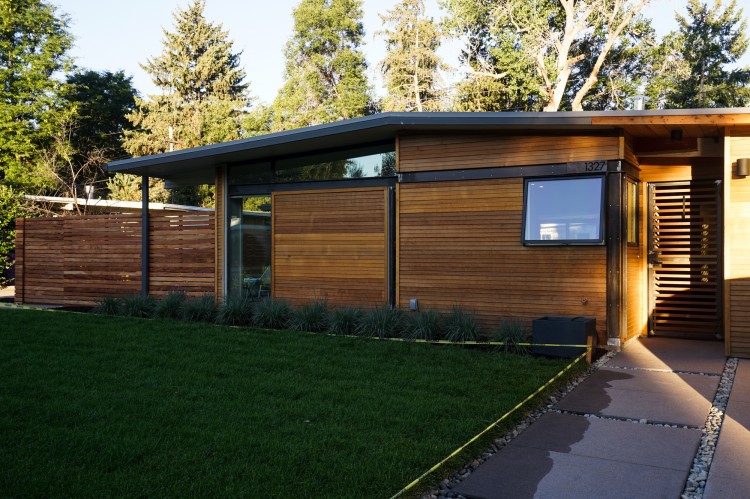 While the only “real” Eichler homes (with the exception of the 3 New York Eichlers) are in California, a developer in Denver put his own spin on Eichler’s Mid-Century, California Modern style with two 1950s subdivisions that could transport you to a California Eichler neighborhood.

Built in the 1950s, Krisana Park and Lynwood are southeast Denver neighborhoods that are virtual treasure troves of Eichler inspired Mid-Century homes. With low-pitched roofs, open floor plans, courtyards, post-and-beam construction and walls of glass that merge inside with outdoors, the 175 homes in Krisana Park and 80 Lynwood homes resemble bona fide Eichlers in just about every detail.

Dubbed as Denver’s “Best Mod 50’s Neighborhood”, Krisana Park was built in the mid-1950s by developer H.B. Wolff, who worked in collaboration with a design/architect/landscape team to create what he advertised as Denver’s first “properly planned” subdivision, building homes that were very similar to those being built in California by Joseph Eichler. The Krisana Park “Eichlers” came in four floor plans. Later in the ‘50s, Wolff expanded his Mid-Century vision into nearby Lynwood (often called Krisana Park’s “sister neighborhood”) with 80 more Mid-Century homes that broadened the original concept to include slightly larger homes, as well as introducing an A-Frame model.

One of these Denver "Eichler" homes is included on the Denver Modern Home & Garden Tour on Saturday, August 22, 2015. What a terrific opportunity to check out California Modern – Denver style!