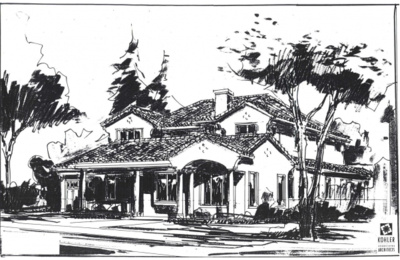 Last winter I made a few observations on the issue of Preserving Mid-Century Architecture, which seems to be an increasingly touchy subject as the needs of 21st Century lifestyles make an effort to merge with the renewed popularity of Mid-Century design and architecture.  Most recently, two Eichler homes in Palo Alto have become the subject of controversy as their owners, the neighbors, and the city of Palo Alto strive to find a middle ground for renovation/rebuilding that will keep everyone happy.  At the heart of the matter are two single-story homes that are longing to become 2-story homes, and it seems that just about everybody has an opinion on what the “right” answer is.

The homes in question are in roughly the same neighborhood (Palo Verde) with one being on Richardson Court and the other about ½ mile away on Louis Road, across the street from the Eichler Swim and Tennis Club.  Although opinions are mixed, some neighbors subscribe to the “live and let live” dictum while others are up in arms.  Truth be told, there is probably an argument for both sides, as there is a mix of styles – including several 2-story homes – in the proximity of each of the controversial Eichlers.

Although Joseph Eichler did build a number of 2-story homes, including several in Terra Linda, Mill Valley, San Mateo Highlands, and Palo Alto, most Eichler neighborhoods feature the simple, one-story façade that most of us associate with Eichler homes.  This is one of the arguments that opponents of the 2-story Eichler renovations have.  With floor-to-ceiling windows in the back of most Eichler homes, residents are concerned about losing their privacy as 2-story homes loom over their backyards.  Opponents have also expressed concerns about maintaining the Mid-Century aesthetic that is a key element in many Eichler neighborhoods.

In the case of the Louis Road Eichler, the owners responded to neighborhood concerns by redesigning the home, and have recently received a green light from the city to move forward with their plans.  It appears that a compromise has been accomplished and that while not all residents are thrilled, the project will progress and harmony will be restored.

As the anxiety level on Louis Road ramps down, however, it seems that the tear-down/rebuild on Richardson Court is shifting into high gear.  While city planners found that the proposed 2-story Mediterranean style home complies with city and neighborhood guidelines, many residents disagree.  Although the owners of the Richardson Court Eichler have redesigned their original plans, neighbors are still not happy and have appealed the city’s approval, citing a restricting covenant from a document created by Joseph Eichler stating that no building shall exceed one-story in height.  Whether this document has been superseded by later agreements is in question – but, in the meantime, it makes for interesting – and contentious times in this quiet Eichler neighborhood.

If you and your neighbors have concerns about maintaining the Mid-Century integrity of your neighborhood, don’t wait for dissention to rear its ugly head.  It is never too early to investigate your options.  Two Palo Alto neighborhoods, Green Gables and Greenmeadow, have protected themselves by gaining status on the National Register of Historic Places.  Other Eichler communities, including Lucas Valley in San Rafael and Fairgrove in Cupertino, have CC&Rs and strong community support.  A few areas, including Triple El in Palo Alto and several Eichler neighborhoods in Sunnyvale have been proactive and are protected by overlays or unique guidelines that help to maintain the character of their Mid-Century neighborhoods.  It is easier – and less stressful - to create guidelines that will help maintain the identity of your neighborhood before the need arises than to fight City Hall.