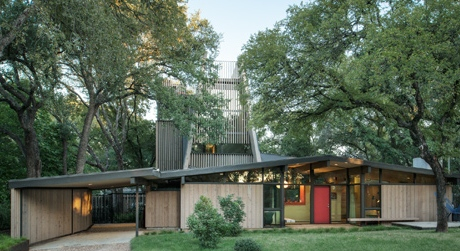 Recognizing the need to supply affordable housing for returning war veterans, Stenger began purchasing land and building his homes, one-by-one, in several Austin neighborhoods in the 1940s.  Originally, Stenger’s homes were priced with an average of $20,000.  Today, just as Eichler’s homes are in CA, Stenger homes are in demand by MCM enthusiasts and price points often hover in the $400K to $500K range – with a few remodels even fetching higher price points.

Often described as the “Eichlers of Austin”, Stenger homes have more than a little in common with California’s Eichler homes.  Stengers are sleek, streamlined homes that celebrate the merging of outside and indoors with walls of windows and natural stonework.  Just as the CA Modern Eichler homes, Austin’s Mid-Century Modern Stenger homes feature open floor plans, exposed wood beams, vaulted ceilings, clerestory windows, and low-pitched rooflines.

California has its Eichlers and Austin TX has its Stengers.  To learn more about Eichler homes, my website Eichler For Sale has tons of information from random blogs to precise Eichler neighborhood information.  To check out Austin’s Stenger homes, a couple of good starting points are ModernAustin and Austin's Mid-Mod Darling.