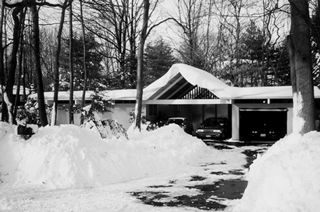 Fifty-two years ago, in 1962, Joseph Eichler did something unexpected.  He returned to his East Coast roots and purchased 140 wooded acres in Rockland County, New York, just 45 minutes north of New York City, with the intention of developing a 216-home subdivision of modernistic homes.  Although the project was not successful, the three homes he did build are legendary as they are the only real Eichler homes ever built outside of California.

The three New York Eichler homes are located in Chestnut Ridge, a small village located within the larger city of Ramapo.  The three homes were designed by two of Eichler’s top firms, Claude Oakland & Associates and Jones & Emmons.  Two of the New York Eichlers have atriums and the third is a courtyard design.  All have the flat roofs (although one has a central gable) that are typical of most Eichler homes – but not necessarily practical in New York’s snow!

Although Eichler’s vision of expanding to the East Coast was never fully realized, it is good to know that his vision still lives, even if in a small way, outside of California.  The next time I venture to the East Coast, I plan to make a pilgrimage to Chestnut Ridge to see these three very special Eichlers with my own eyes.