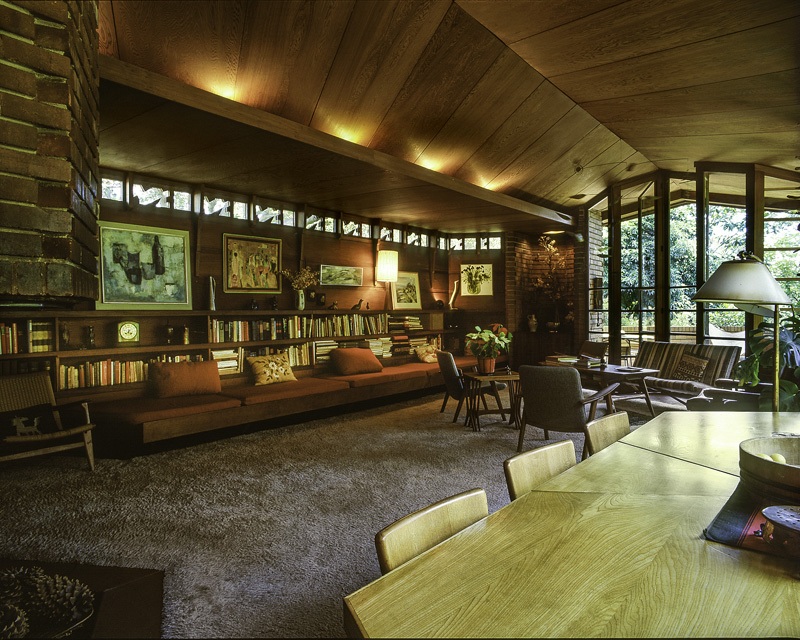 Inspiration is an interesting thing and it can come from anywhere; a chance comment by a friend, a piece of music, or something read about in a book.  Joseph Eichler’s inspiration, which created a lifestyle for thousands of Californians, came from his experience as a tenant living in a Frank Lloyd Wright designed house called the Bazett House.

Built in 1939 for Sidney Bazett, the Usonian Bazett House in Hillsborough CA was home to Eichler during the early 1940s until new owners, Betty and Louis Frank, moved in in 1945.  It was the memory of his time in this home, with its open floor plan, use of natural materials, and light filled spaces that inspired the milk and egg salesman from California to share his love of this style of architecture by producing more than 11,000 homes in the Bay Area, Sacramento, and Southern California – and, incidentally, helping to create the easy indoor-outdoor style that has come to be known as California Modern.

In 1951, six years after moving from the Bazett House – and just two years after building his first housing tract, the memory was still alive for Joseph Eichler, and he built himself a Frank Lloyd Wright-inspired home, designed by architects Anshen + Allen, in Atherton, a small affluent town in San Mateo County.  The Eichlers lived in their Atherton home until they moved into another Eichler built home (an apartment in the Summit on San Francisco’s Russian Hill) in 1965.

As were his own home and the thousands of tract homes that Joseph Eichler built in his career as a developer, the Bazett House was designed as a low-slung, single-story, three-bedroom home with radiant floor heating and a free-flowing floor plan that provided easy access to the outside.  Unlike Frank Lloyd Wright’s homes, however, most of Eichler’s were mass-produced, bringing modern architecture to middle-class America.  The design has stood the test of time and is as popular (and sometimes controversial…) as it was when the Eichler homes were first built.